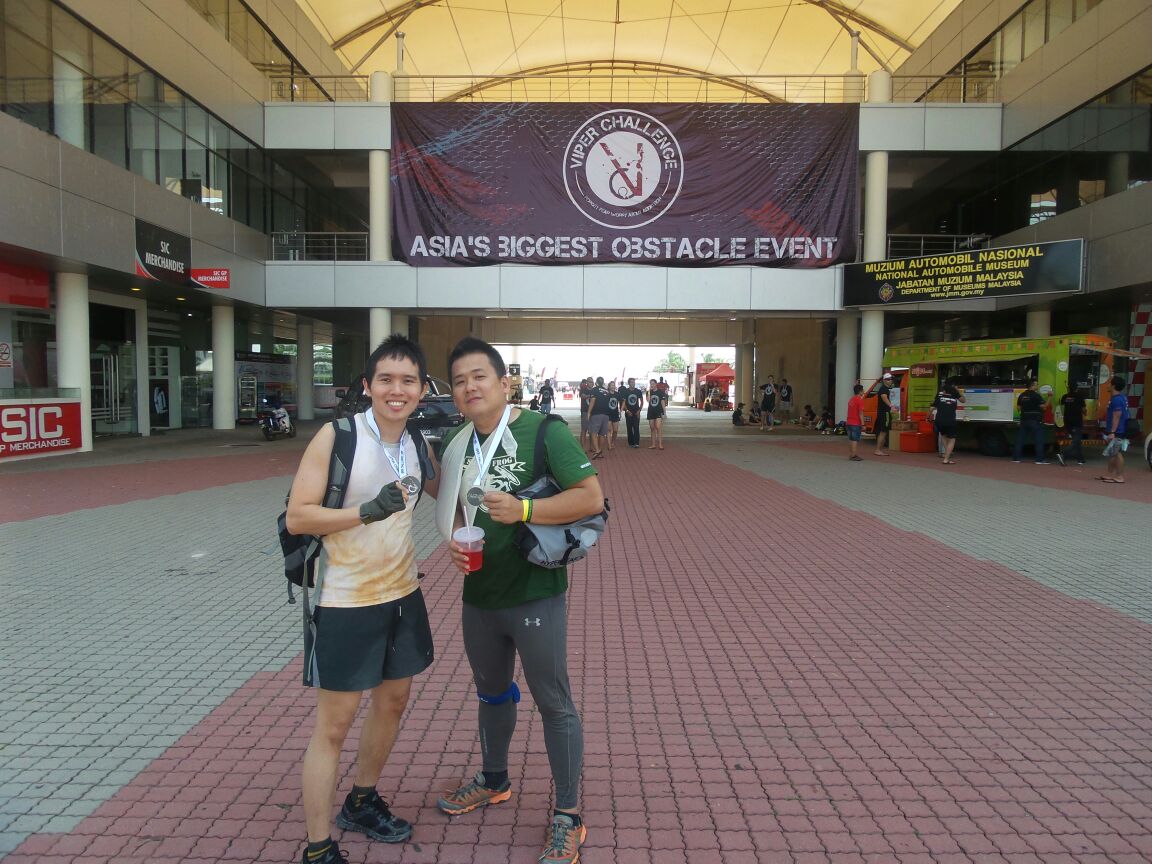 5 months since the last Viper Challenge… and that’s one more Viper Challenge accomplished! 20 km of 20 obstacles, though this time’s VC is harder than last year’s. Some of the people I came across and talked to agreed. Joining me this time is my friend Shawn Liau from Sabah. When he planned to come to KL to do the Viper Challenge this year I wasn’t really up for it but he saved my ass back in Mount KK and that said, I owed him one. lol I came across a few familiar faces, one of them in particular Shanker Jayroma whom I’ve not seen in years – but he’s definitely making waves in the local entrepreneur scene!

IMO this time’s Viper Challenge is better organized, and the difficulty level has gone up a bit. I didn’t train as hard as for last year, and I had 3 hours sleep prior to the event.

This time we were the first batch at 6:00 AM, though we truly got started 10 minutes later. We had to climb over a short hurdle to even get to the starting line… foreshadowing the fate of the challengers on the obstacles to come!

Ok I’m writing these down real quick before I forget!

(Some of them may not be in the precise arrangement… just counting on my memory power!)

1. Submerging into muddy ice water. It’s actually easy but I gave this a pass due to the muddy waters. Didn’t want to start out nauseas too early!

2. Jump over fire. Seems to be recycled from the last challenge, only that there is no water pool on the other side. Easy.

3. Bunker of mud. This used to be a later obstacle, seems to be moved forward this time. There were at least 4 to 5 trenches to overcome, with two of them filled with muddy water.Medium difficulty.

5. ‘Mountain Dew’ grappling. Hard. I overcame this last year. The organizers had since then lined up a few of the same obstacles to overcome congested traffic here. Gave this a pass though.

7. Climbing up a tall wall around 4-5 meters high. Psychologically scary due to the height, it scared off quite some challengers. I got this over with.

10. Walk over fencing (should be commando crawl in watery mud). Easy.

11. Bad plumbing (5 feet water). Easy IMO but probably not so for anyone with claustrophobia. Took me a while to muster my courage to enter the pipe.

12. Long slide. This one was scary as the longer one slides the faster it gets and off he goes into the muddy water at high impact. Needs a lot of mental courage to overcome the perceived fear.

13. Bunker of mud (minor). Same as (3) as except that there are only two trenches filled with muddy waters.

14. Monkey ring. Hard. Failed this before, and I know better than to force myself.

15. Nerves of steel. Hard. I observed challengers holding onto steel wires with their legs but I followed a girl’s example of climbing the wire by hand. That worked for me despite the lack of grace!

17. Crossing the plank. Hard. Wiped out.

18. Inclined wall (major). Hard. Didn’t get to do this last round but now with Shawn’s help I overcame it!

19. Underbarrel by the lake. Same as (1) but multiple underwater submerge and in cleaner waters. Did this!

20. Running up the ramp. Very hard. I failed in all three attempts here. Shawn is a seasoned climber and trains like hell. Alas, he injured his right arm at this final obstacle and that ended our attempts, as we have to get him some medical attention.

So that’s 14 out of 20 obstacles completed successfully for me.

That’s enough Viper for a long time to come!