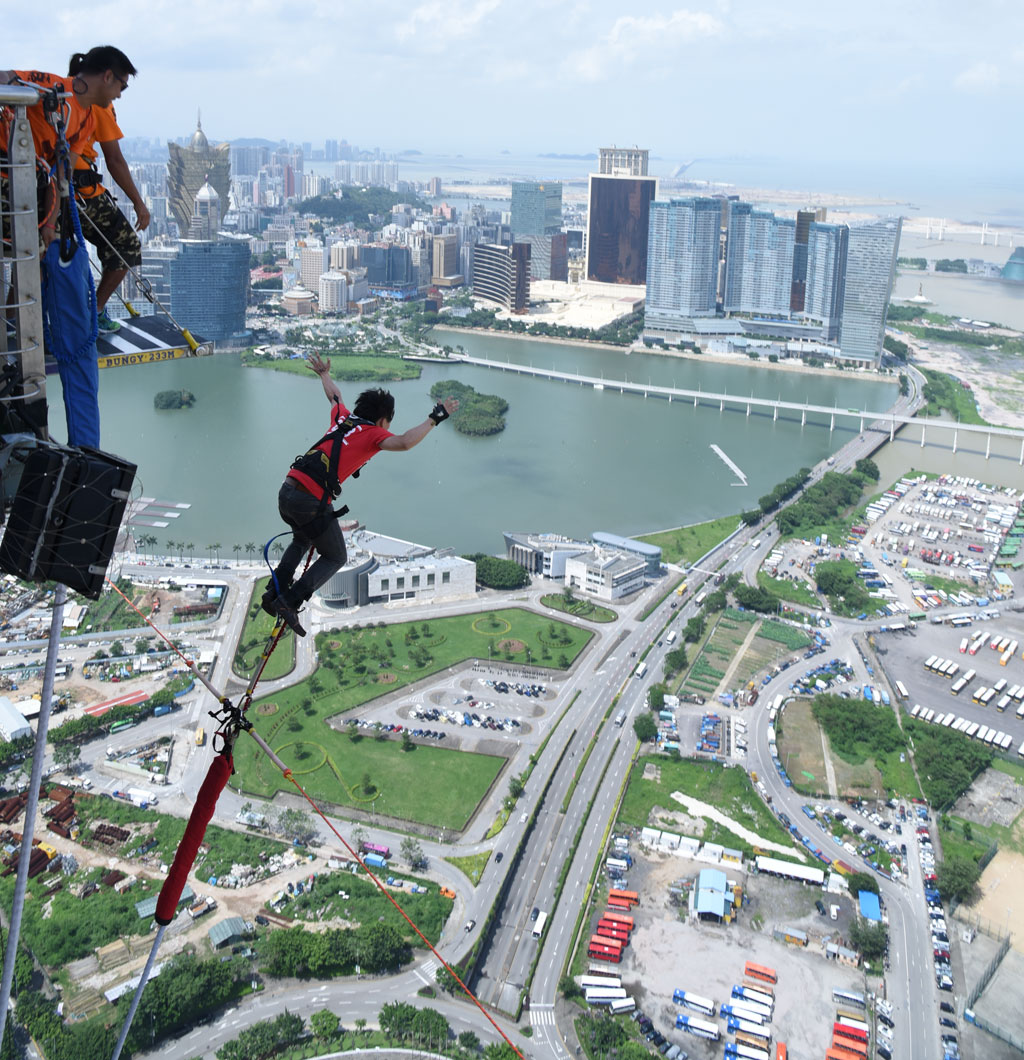 Right after Hong Kong, I followed Sasa and her friends to Macau. It was just one hour Ferry ride and the vibe here is entirely different. Not as congested and packed to the brim like Hong Kong. Roads are cleaner, and hotels are nice!

We stayed at Broadway Macau and we would be here for just 2 days. So we went swimming and walked around the city for some sight seeing at night, including swinging by some casinos.

However the main attraction for me in this trip is the Bungee Jump at the Macau Tower, said to be the sight of the tallest bungee jump in the world according to Guinness Book of World Records.

233 meters in comparison to the Auckland Tower Skyjump I did 5 years ago at 168 meters. So that’s probably like an extra couple of seconds of freefall and scare.

I was feeling anxious leading up to the jump itself, but as soon as I leaped off the platform, all fears wore off. The 10 seconds of free fall went by quickly.

The only thing giving me a post-traumatic disorder is, believe it or not, the price tag for this jump.

I was in for a nasty surprise when I registered for the bungee jump – I was expecting it to be around $200 – $250 (around the price of the Auckland Sky Jump, or maybe slightly more since we’re talking about the tallest bungee jump in the world)

But not only did it cost double, there were no printed photos or cert after the jump even though I went for a rather ‘premium’ package that included videos and photos.

I had no problem forking out that sum, but it certainly isn’t value for money, knowing I was burning $50 a second on my way down and all I got was a USB drive after that. (I was told I will be given an e-cert by email 2 days later, didn’t get it to this day)

Should you do this bungee jump? For a YOLO kind of experience or for the sake of striking a list off your bucket list, sure go ahead – just be informed on the price you’re about to pay, which is substantially more expensive than other bungee jumps – most likely taking advantage of their coveted Guinness World Record.

Oh well, at least I can tell you I’ve done it before 🙂

Overall good 2 days spent here, and 3 days in Hong Kong before this. Now it’s time to go back to Malaysia…